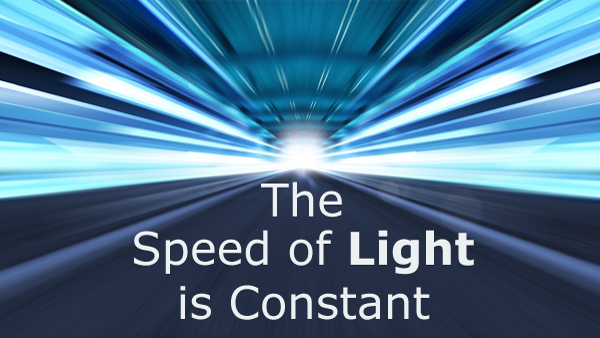 Saad and I were discussing the theory and concluded that it may well be that the speed of light is actually variable! OK so we’re not academically qualified scientists, but then again neither was Einstein!

Our thinking is along our very basic understanding of the Big Bang. If we suspend our disbelief then we are to understand that ‘…nothing in the middle of nowhere, exploded for no reason…’ (scientifically impossible, but on this occasion it just did – like I wrote above please suspend disbelief). Now if this occurred in the middle of nowhere, then assuming that light, at that time travelled at 186,000 mps, then it would have out manoeuvred the influence of gravity which came in to existence a few plank times later. So, without any obstacles of any kind, what was there to influence the speed of light? So with the absence of any kind of influencing factors, light must have gathered momentum from the ‘Big Bang’ and actually accelerated. With nothing to stop or influence it, it continued to gain momentum

If this were true, then this would certainly help explain why we find the temperature of the Universe to be pretty much the same all over, and would circumvent the need or requirement for other unproven ideas and hypothesis such as inflation.

This must mean, therefore, that light has a variable speed in the spectrum of detectable to non-detectable (with current technology and mechanisms).

What do you think?